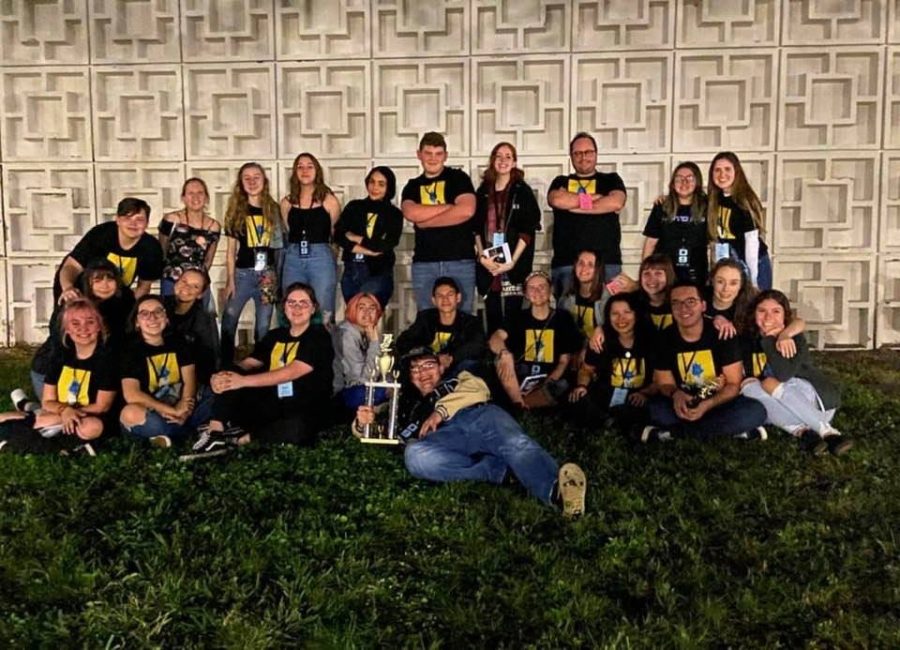 The entire theatre company poses proudly with the trophy representing their Superior for Brainstorm.

Before Thanksgiving Break, the Durant Theatre Company performed “Brainstorm: A Journey Inside the Teenage Mind” for Durant students, family, and faculty.

“Brainstorm”, a one act play, was written by Mr. Arment and his students, making the show personal and unique to Durant’s production.  Sydni Burge, a sophomore and actress for the Durant Theatre Company, said, “Every production of “Brainstorm” is different, because we play ourselves and our parents.  Everyone has a unique relationship with their parents and the show highlights that.”

The script, originally formulated by Ned Glasier, allows the school using the idea to fill in their own characters, based off the students of their drama club, and personalize it with interesting facts about their unique cast.  Mr. Arment commented on the development of the script, saying, “We had to do a lot of initial work on the background of each of the cast members. We really had to dive in through worksheets and conversations and collaboration to discover what has gone on in the lives of these kids.”

The play explained the teenage mind to the audience through comical and interactive scenes.  “Brainstorm” portrayed each student’s fears of growing up and the struggles they face as a teenager, such as those that come with homework, chores, and extracurriculars, all while trying to maintain healthy relationships with their parents.

Jordan Maddock, a stagehand for “Brainstorm”, said, “The [on stage] survey [with the cast] shows how the teenage brain functions.” It also showed how many of the cast’s teenagers struggle with the challenges that come with being a young adult.

Each student had the opportunity to portray one of their parents, resulting in laughs from the audience, but also showing how teenagers view their parents.  Isabelle Hoofnagle, an actress for the Durant Theatre Company, said, “[The portrayal] actually took a fair bit of preparation too. I had to watch my dad and study his mannerisms and his voice.”

Burge said, “Our portrayals of our parents are a way to lighten up the show, but also to say things we’ve never gotten to say [about our parents] before.”

The cast then played Never Have I Ever with the audience to show them that they are just like the cast of teenagers.  Never Have I Ever also allowed the adults in the gallery to remember parts of their teenage years and reminded them of the similar struggles they faced.

The show concluded with the cast showing letters they had written to their parents on poster boards.  Mr. Arment said, “The cast was coming from a place of such honesty and bravery that it really just set the play apart from other plays that I have done.”