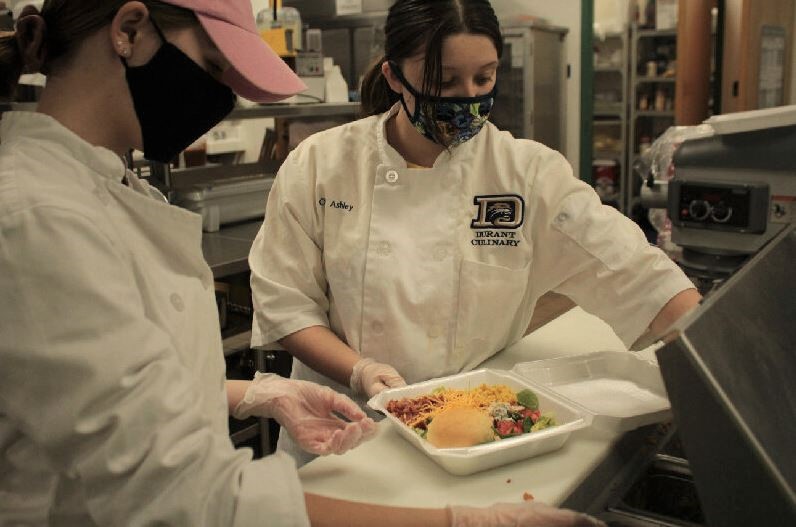 Ralph Underwood is the new culinary teacher at Durant, teaching both Culinary I and II. This will be his tenth year of teaching.

What other jobs did you have before you became a culinary teacher?

“In high school I worked for TECO as a human resources specialist, in College I worked as an emergency band control route. After I went to culinary school I worked for Outback as a trainer, so I would go to different Outbacks and I would train employees on any new food that was coming out, and also if a food was out of spec, so like if a Bloomin onion was cooked incorrectly and someone had called corporate and was like ‘hey, I’ve been to this outback 3 times and it’s been wrong’, they would send somebody out to retrain people, and I was part of that. I also did Outback catering where we catered on-site, so all the equipment was brought to whatever site we were on and basically executed from there. After that I worked for Hyatt [Coconut Point and Bonita Springs] as a banquet chef, so I would do any big banquets, weddings, company retreats, so anytime a lot of people got together and they would need a lot of food, I [would be] in charge of… that. Then I came to the district”

Why did you become a teacher?

“I actually got recruited to become a teacher. I was working at Hyatt in Naples, of course I grew up here, so somebody who knew my mom was like ‘hey we need a chef at our school’, so I went through the process of putting my application in [and] I ended up working at Armwood, which was ironic because I graduated from Armwood. Then I ended up transferring to Hillsborough for a couple years and then I ended up here.”

Why did you choose Durant?

What is your impression of Durant so far?

“Family. It feels like a small city, kind of a network of people working together. I’ve been to schools where people don’t even say hello to each other and it gets kind of cut throat, but it’s different here. People seem to want to work together and that’s definitely a positive, you can kind of collaborate with other programs and do stuff together, pool resources [and stuff like that].”

What is the best part about your job?

“The best part is seeing students come in with like no knowledge, and then by the time the end of the year comes, they can go and work in the food industry if they want. [It] also makes them employable, so if somebody comes in and never worked a job before, then now they have confidence to go and apply for a job and answer questions. So, to me that’s rewarding. And then having students come back and tell me that they remember having me as a teacher, [like] that was  ten years ago for me and I don’t even remember that moment, but for them it was great. So, just creating memories with students that last for lifetimes.”

What is the hardest part about your job?

“The hardest part is finding motivation for students. Not everyone has a goal of being a chef, or even cooking for themselves. Some people see it as an easy grade, or as this being a break class, so finding something that everybody wants out of the class and getting them motivated to work towards it is kind of the hardest part.”

What is your favorite thing to do outside of school?

Are you married and do you have kids?

“Yes [I have a wife and] two kids, a boy and a girl. My son just started high school, so he’s a freshman, and my daughter is a seventh grader”