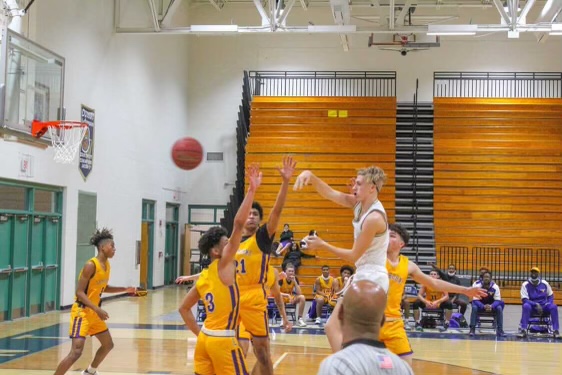 This school year, Jones was enrolled in eLearning for the first semester while playing on Durant’s varsity basketball team, but he recently switched back to in person schooling.

On Durant’s team, Jones plays small forward and shooting guard. These positions require quickness, ability to rebound, adept ball handling, inside and outside scoring ability and strong defensive guarding. According to maxpreps.com, Jones is ranked 59th in the state with a higher blocking average than the national average.

Throughout his eLearning experience his mother kept him motivated to keep his grades up and helped him get to basketball events on time. “My mom stays on top of my school to make sure I’m doing good and getting my stuff done, but with basketball I handle that on my own. She gets me to my practice, training sessions and games which helps a lot.”

When asked about the experience he had eLearning, Jones said, “I’ve definitely gotten better with eLearning even though motivation isn’t as high… It’s all about time management… And it’s good to get back and see friends,” said Jones.

Jones first started with Durant’s basketball team in 8th grade, and he encourages anyone who is thinking about joining the team to “Just come out and try. We have eight seniors this year, so a lot of spots will open up next year.”

As for his future, Jones hopes to play college basketball and then later on play professional ball. He doesn’t know exactly where he plans to attend but does have a goal he’s working towards.

“I know I want to play basketball in college and would like to play after, but anything can happen.”