TV KNOWLEDGE FOR 1000: He was the greatest gameshow host of all time. ANSWER: Who was Alex Trebek?

He was diagnosed with stage 4 Pancreatic Cancer in March of 2019 and began treatment quickly after. Despite the grueling chemotherapy treatments and adverse effects, including depression and immense pain, Trebek continued to host Jeopardy as he had for 36 years. In March of 2020, he surpassed the one year survival rate of 18%, which he said he was “very happy” to pass.

“He was someone you could count on to entertain you every weekday, even when his health barely allowed it,” said former Jeopardy contestant James Holzhauer. “Anyone wishing to honor Alex’s memory should consider a donation to his favorite charity, World Vision.”

Within hours of his death, tributes to Trebek poured out from fans and contestants of Jeopardy on Twitter.

“It was one of the great privileges of my life to spend time with this courageous man while he fought the battle of his life,” tweeted Holzhauer.

Trebek began his career as a radio host for CBC, hosting quiz and game shows in Canada. Upon moving to America, he continued as a gameshow host with NBC before landing a job as the host of Jeopardy in 1984, earning him multiple Emmy’s for Outstanding Game Show Host and the most nominations (31) for the category. Trebek hosted over 8200 episodes of the gameshow, the most of a TV game show host according to Sony Pictures.

On Jeopardy, Trebek became known for his humor and quick wit, but contestants knew him for his caring and dedicated personality.

“Alex wasn’t just the best ever at what he did. He was also a lovely and deeply decent man, and I’m grateful for every minute I got to spend with him,” said Ken Jennings, who holds the record for longest winning streak on Jeopardy.

Trebek’s last day in the studio was October 29 and his final episode as Jeopardy’s host will air on December 25. Sony Pictures has not announced plans for a new host. 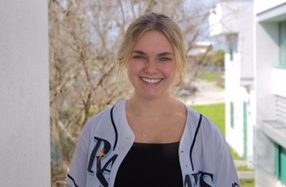 Lily Belcher is a junior at Durant High School and is the Editor in Chief for the PawPrint. She is freelancing for the Osprey Observer this year and hopes...

Television celebrities and athletes set to take the place of late gameshow host.

Ken Jennings takes the Jeopardy! stage as a host for the first time

The popular game show Jeopardy!, known and loved throughout the world, is still the same as it has always been, just with new faces. The death of former longtime host Alex Trebek made cause for a new approach to show hosts until a permanent replacement for Trebek could be found. The first guest to host on the show after Trebek’s final episode, aired on January 8, was Jeopardy’s Greatest Of All Time contestant, Ken Jennings.

Jenning’s appearance as a guest host lasted for six weeks, from January 11 through February 19, four weeks longer than originally planned due to scheduling conflicts with other guest hosts. Jenning’s sarcastic and sometimes snarky personality took a more relaxed friendly tone while talking to contestants, much like Trebek. Jenning’s run as a host was well received by Jeopardy! fans as he modeled Trebek’s love for the game and paid tribute to the late host each night by closing every episode with “Thank you, Alex.”

After his final episode as guest host aired, Jennings tweeted, “Thanks for watching, thanks for your patience with a tough learning curve…and, as always, thank you Alex.”

Thanks for watching, thanks for your patience with a tough learning curve…and, as always, thank you Alex.”

Following his extended performance on the show, Jenning’s was forced to pass the cards to Executive Producer Mike Richards in order to fulfill other filming obligations. Richards served his scheduled two weeks and received the best reviews from viewers. His charismatic approach and knowledge of the game was evident in his hosting performance.

“As a Jeopardy fan, I really like both Ken and now Mike as hosts… I really hope they consider either Ken or Mike permanently.” said Twitter commenter Mary L.

Journalist and New York Times best-selling author Katie Couric is the current guest host until the end of this week. After her, Doctor Mehmet Oz (March 22 through April 2) and former Green Bay Packers Quarterback Aaron Rogers (April 5 through April 16) will take their turn on the air, followed by anchor Anderson Cooper (April 19 through April 30).

Lily Belcher is a junior at Durant High School and is the Editor in Chief for the PawPrint. She is freelancing for the Osprey Observer this year and hopes... 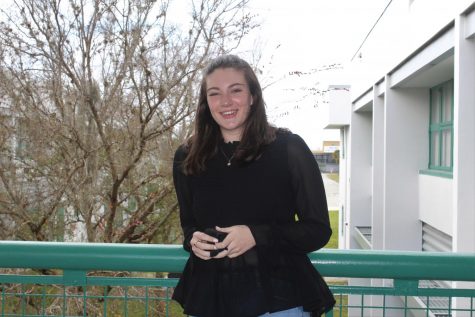 Rachel Hesse is a senior at Durant High School and the Managing Editor for the PawPrint Newspaper. Although new to the PawPrint this year, Rachel has been...