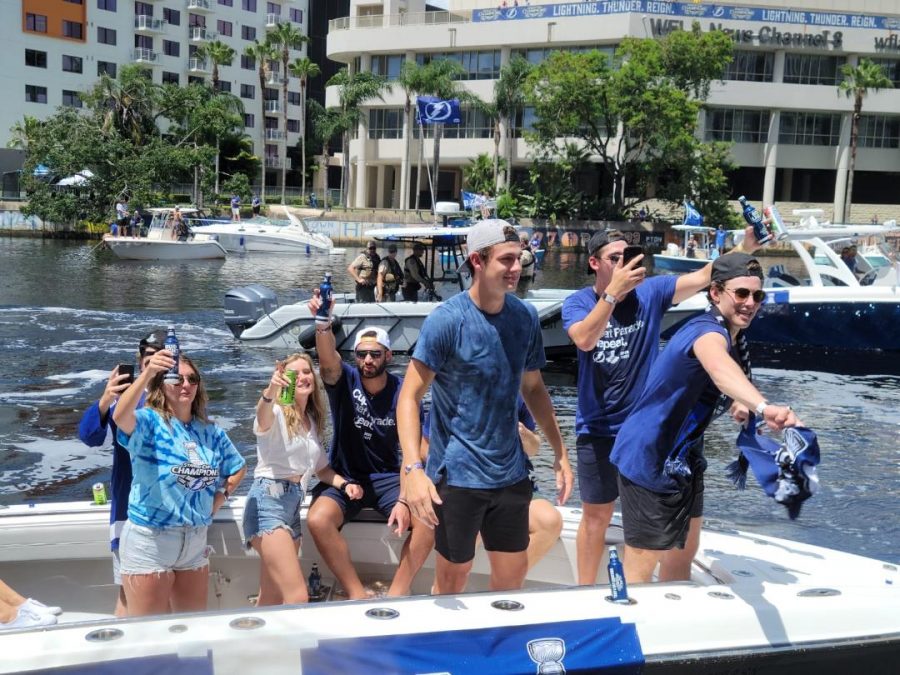 The Tampa Bay Lightning won their third Stanley Cup this past season on July 7 after beating the Montreal Canadiens. It was their second Stanley Cup in the past two years. The team had the chance to celebrate all summer with parades and events in Tampa and they each had a day with the cup in their hometown. Now, it’s time to go back to work.

The 2021-22 National Hockey League season starts on October 12 for the Lightning and they are back in town getting ready. This past weekend, from the 17-19, they had different events for fans. They have also used the summer as a chance to showcase rookies and prospects to build up the lineup for this year. After this weekend, official training camp will start and preseason games kick off on September 28th at Amalie Arena.

During the first scrimmage, Lightning prospects displayed their skills with their 5-2 victory over the Nashville Predators prospects. One of the stars was goalie Amir Miftakhov, who saved 35 of 37 shots.

“I thought he was great,” assistant coach Eric Veilleux said in an article with Bryan Burns. “He showed why he was here, He had a great game. He was awesome, to be honest.”

“You want to make a good first impression… I just wanted to show why they signed me. I always want to play my best. I felt pretty prepared,” Ryfors said during an interview after the scrimmage.

The real question everyone is asking themselves is do the Bolts have the team to go for a third cup in a row?

With the whole third line gone (Forward Blake Coleman traded to the Calgary Flames, Forward Yanni Gourde to the Seattle Kraken and Forward Barcklay Goodrow to the New York Rangers), the Lightning lost big pieces from players who contributed to the winning of two Cups in a row. But even with those players gone they still have their top players. Forward Brayden Point scored in nine games in a row during the playoffs which was only a goal away from breaking the NHL record. Superstars like defenseman Victor Hedman who is great defensively and offensively, forward Nikita Kucherov, and forward Steven Stamkos are all returning to the lineup. Goalie Andrei Vasilevskiy, who won the Vezina Trophy in 2018, was nominated for the award four years in a row and held the best save percentage in the league last season will be back guarding the net this year.

Great rookies like Ross Colton who’s scored 12 points in 30 regular season games, Callan Foote and forward Alex Barre-Boulet, Syracuse Crunch (minor league for the Tampa Bay Lightning and Florida Panthers) star will all be joining the Lightning lineup. They also acquired players like defenseman Zach Bogosian who won the cup with the Bolts in the 2019-20 season joins the team from the Toronto Maple Leafs. Defenseman Andrej Sustr, who played for the Lightning before, was acquired from HC Kunlun Red Star Goalie Brian Elliot joins the team from the Philadelphia Flyers as a Curtis McElhinney replacement. Forward Corey Perry who lost the Cup while playing against the Lightning while on the Montreal Canadiens and Dallas Stars will try to win a Cup with the back to back Stanley Cup winners this year. Finally, forward Pierre-Edouard Bellemare was acquired from the Colorado Avalanche, adds great team spirit to the lineup. The Lightning gave these five players and the rookies smaller contracts making it easier on the team when it comes to cap space and moving players from the minor league or to another team.

The Lightning might lose the dynamic they had with their third line, but that doesn’t mean they can’t pick up a brand new one that’s better and more consistent.

“That’s why I believe there’s a lot of reason to believe we can continue to compete for the Stanley Cup over the next few years, at least for the next three, considering that all these players are under contract and we’re going to be able to keep them going forward,” BriseBois, Tampa Bay Lightning’s general manager, said in an article by Tom Gulitti.