The Lightning Makes It To The Playoffs Again 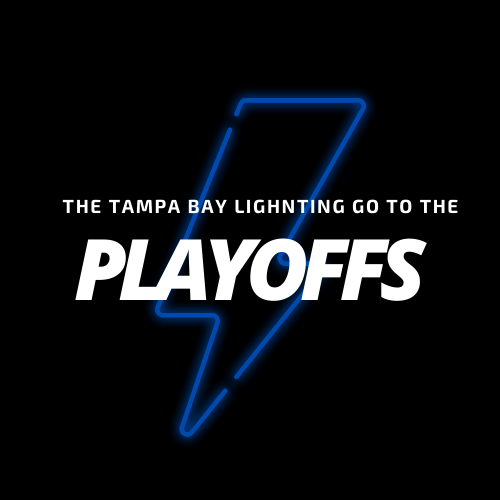 The Tampa Bay Lightning goes to the playoffs.

The Tampa Bay Lightning have made it back to the playoffs for the fifth year in a row after their back-to-back victories in 2020 and 2021.

The playoffs began May 2, 2022 for the Lightning, against the Toronto Maple Leafs, beginning with a devastating loss of 5-0. In game two, the Bolts bounced back with a victory of 5-3.

Before the playoffs started, there were mixed feelings from Tampa fans to NHL critics and officials. The team had a rough beginning to a season – a lot of people called it a cup hangover – as they kept losing games and later delt with the loss of two key players, Nikita Kucherov (who was gone for over two months) and Brayden Point (who was also out for over a month). Those two players have highly contributed to the team over the years.

The team has been able to jump back from their major loss, for a while, but went back to a slump from March to a part of April. They loss four games in a row, twice, which they haven’t done in years. Many people believe it’s the downfall of the team, others believe it was due to the new additions of Brandon Hagel (Chicago Blackhawks) and Nick Paul (Ottawa Senators). Even then, the Lightning have been able to stay top ten in the league and score 26 goals in four games by the end of the season; Captain Steven Stamkos breaking the franchise point record with 954 points and counting, passing Martin St. Louis and Stamkos was also able to record his first 100 point season along with Victor Hedman having one of his best seasons yet.

“I don’t think the slump will come back during the playoffs, our team usually does very well coming out of a slump and I think we can keep up the good work because we have a good mentality,” said junior Kendall Mack.

Despite the first loss on that first playoff game, the goalie, Andrei Vasilevskiy has gone 15-0 after a loss in the playoff. The team hasn’t won back to back games either during the playoffs.

The Tampa Bay Lightning are going against the Toronto Maple Leafs the first round. A team that has shown leadership on the ice and on those boards, especially their star this year, Auston Matthews with over 60 goals this season and a total of 106 points in 73 games played, which averages to 1.4 points per game. The Lightning is not going against an easy opponent.

“I think what really separates us from the Leafs is that we’ve got solid goaltending, while Toronto has had their struggles…. As long as Vasilesvkiy is solid, Kucherov and Point play as well as they did last season, and Hedman continues his career-best season, I think we can take Toronto out in at least 6,” said Noah Wilson, a huge Tampa fan despite living across the country.

Toronto might have key pieces to win this but just like any other team, they have their weaknesses.

Despite the different opinions many people have formed over this year’s team, one thing we can all agree on is how much everyone enjoyed seeing their team go back-to-back and how they want to see it happen again.

“Winning back to back cups is one of the best if not the best experience of my life, it was such and still is such a special moment of my life rooting for this team,” said David Fonte. “They will come back harder and stronger.”

The Lightning are locked in and ready to defend what is theirs. To stay updated with more lightning news, follow their social media: